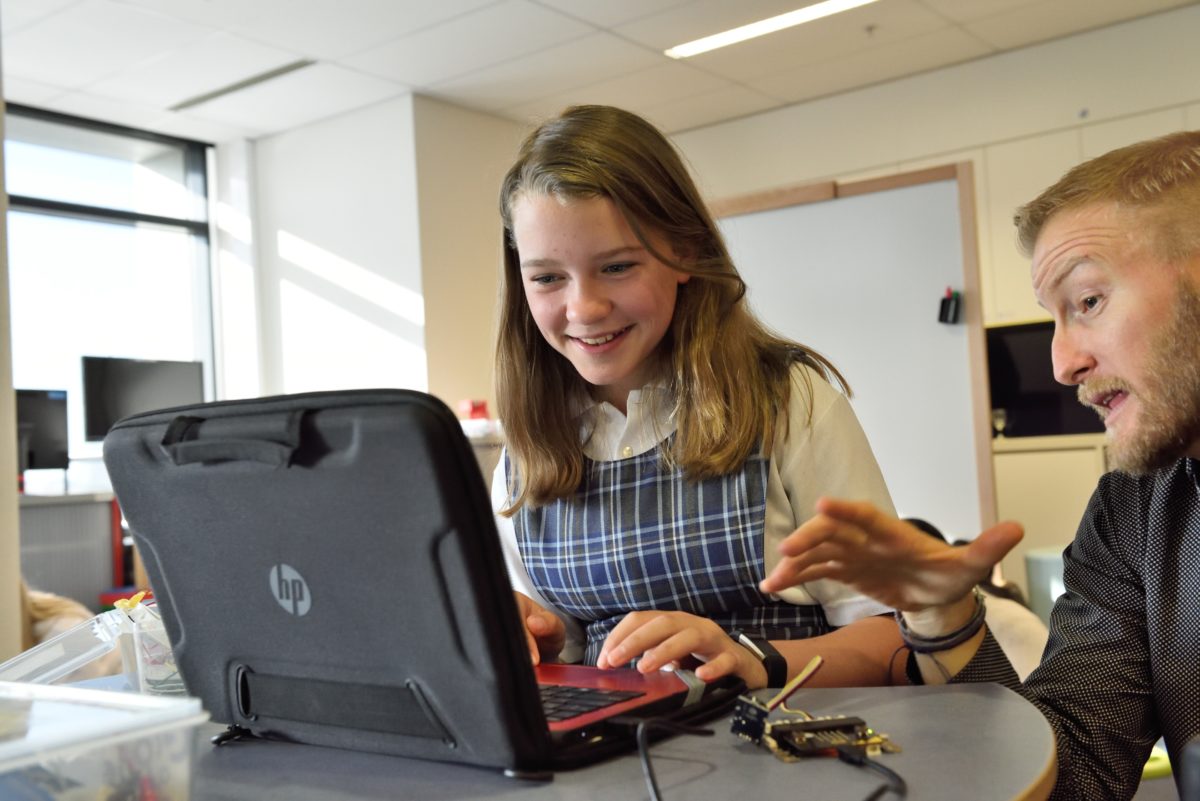 Why I Left Silicon Valley, EdTech, and Personalized Learning

It’s hard to say whether I chose personalized learning–or whether it chose me. I’m embarrassed to admit this, but when I moved halfway across the country in 2014 to join an education technology company and network of microschools, I wasn’t entirely certain what I’d gotten myself into.

I knew I’d be teaching, and I knew that the company would be developing technology for the classroom. But I went in with a different vision for what I’d be contributing. I thought that perhaps I’d help develop a new word study app or maybe even some sort of digital math game. When I got there, I learned very quickly that I had joined a company dedicated to personalized learning, an idea that was relatively new to me at the time.

I’d spent a great deal of my career at that point dedicated to reaching all learners. I’d read a great deal about differentiated instruction, and through my first job in public school, I explored how digital technology intersected with differentiation, helping lead a pilot program for incorporating one-to-one iPads into the classroom, now a rather standard practice across the country. Unbeknownst to me, this background prepared me for what would end up being three years in Silicon Valley, working towards a nascent, technology-driven vision for personalization.

I quickly learned that our company would attempt to achieve personalized learning all through a playlist. Through unique arrangements of activity cards, sent digitally to each child, we would attempt to actualize this vision for personalization, intended to help every child reach their full potential.

At first, I was no less than captivated by the notion of using digital technology to personalize. I was thrilled to contribute to this nascent philosophy that we hoped would disrupt and revolutionize the school system. As a result, I spent countless hours creating curriculum, collaborating with technologists that would help bring the teachers’ ideas to life, and otherwise being a fierce advocate for the company’s vision.

But it wasn’t long before the realities of our brand of personalized learning set in.

That first year, I was placed in a second through fifth-grade multi-age classroom, a span of ages that felt unwise given the developmental and academic breadth that existed between our youngest and oldest learners. But I was up for the challenge, leaning into this hyper-individualized vision for personalization and willing to give it all I had. After all, if every child had their own playlist of activities, why would it matter having children of all these different ages in the same room?

Well, it turns out it mattered quite a bit. The developmental and academic differences between the children, coupled with the fact that we were supposed to plan individualized playlists of activities for each child, made the everyday workings of the classroom quite difficult to manage–even though I didn’t want to admit it at the time. Not only was I spending an exorbitant amount of time arranging playlists and assessing playlist activity cards, I was also running around haphazardly during the school day, trying to help children navigate their playlists and the many obstacles they encountered while learning new academic content.

In essence, the theory behind the playlist did not set us up for the realities we’d face when trying to put the playlists into action. By the end of the school year, I hardly recognized my own classroom. At a certain point, I gave into the external pressures from other teachers, and shifted my math curriculum from project-based experiences to Khan Academy, a web-based adaptive tool that sends students math videos aligned to their ability level. I had attempted to plan project-based experiences that would be open-ended and flexible enough for this heterogenous group of students, but my efforts proved to be unsuccessful, as I began to see just how challenging it was to individualize curriculum to this degree and for this range of students.

I looked around my classroom, disgusted with myself and ashamed of my pedagogy. My kids were turning towards screens more than they were turning towards each other. They were not collaborating around mathematics and interacting with it as though it was the language that it is; they were consuming mathematics through decontextualized videos. They were bated into answering more questions through gamified programs that fed them carrots and sticks and kept them addicted to the digital interface through stickers and badges.

I spent the better part of two more years there, attempting to work within the system and make small changes to the interface that we were trying to build. I tried to beckon us away from this hyper-individualized brand of personalization that seemed so seductive to so many. But I kept coming to the same barrier: the company wasn’t interested in best practice or what was best for kids. They were interested, primarily, in what they thought was going to sell. They were interested in what was going to please investors and wealthy parents because, after all, they were the ones with the money.

But they weren’t the ones who were seeing it in action. They weren’t seeing their kids staring listlessly into their screens, consuming content like they might mindlessly consume a bag of chips in front of the television. They didn’t see how much more often they were turning towards screens than they were turning toward their peers for collaborative learning. They didn’t see the unstructured and permissive learning environment at the school that was being branded as “student-driven.”

It’s funny because when I arrived at the company, I was told that we, teachers, would be treated as “twenty-first century knowledge workers.” We were all told that our expertise was valued and that our knowledge of child development and effective pedagogy would drive the company’s goals. But it became exceedingly clear over my remaining two years there that this was simply more marketing material, intended to keep educators in tow and maintain optics for a brand that had attracted the likes of Facebook and other technocrats in Silicon Valley. It was clear in the moment when the CEO told me that an educator’s work was “one off,” and that I therefore deserved a lower salary than that of an engineer’s; it was clear when the company continued to push the same tools forward, despite insurmountable evidence that the tools were ineffective; it was clear when the Chief Technology Officer (CTO) told me the artificial intelligence could be trained to do parts of my job.

I left Silicon Valley, education technology, and this brand of learning that they inappropriately called “personalized” learning because I realized just how dehumanized and depersonalized learning had become at the hands of technology elites who had no business advising anyone on how best to teach, no less developing tools that would significantly impact pedagogy and classroom logistics. They didn’t value educators and pedagogy, no matter how many times they called us “twenty first century knowledge workers” or praised us to the public. What they cared most about was profiting off of the schools, teachers, and students who make up the education system.

My former company was not alone, though. They were not the sole perpetrators in their quest to profit off a public system. We see this in far too many places in today’s society. We see pharmaceutical companies preying upon the sick; we see politicians preying on governments, both foreign and domestic, for the purpose of personal profit and wealth accumulation; and we see technology elites, attempting to command markets, squash small businesses, and hemorrhage money from our precious institutions, including but not limited to our schools.

This example of technocrats using technology-powered personalized learning to turn a personal profit is merely a symptom of late-stage capitalism that has consumed the United States. It has stripped so many of their dignity; it has only exacerbated inequity; and it continues to strip our schools of their humanity, replacing it with automated programs that only reinforce an outdated industrialized paradigm for learning.

But it’s not hopeless, even though it may seem that way. We can, in fact, make subtle but monumental changes to our classrooms that dismantle the toxic practices of this digitally-driven era in which we’ve found ourselves. And in doing so, we can restore equitable classroom practices that focus on bringing students together so that our classrooms become rehumanized places where all children can learn together, regardless of identity, ability, or situation.

While there may still be hope for our schools and our classrooms, we cannot afford to wait any longer. Every moment that our students are turning towards screens in lieu of turning towards one another is a moment where learning is further dehumanized. Every moment they are robbed of the human connection that is essential to meaningful learning is just another moment where they are taught that they are objects of the education system, as opposed to subjects of their own educational narrative.

We must have the courage to reclaim our classrooms, reclaim our pedagogy, and reclaim what it means to make learning “personal” to this generation of students. We can do this by resisting the use of personalized learning tools, by building flexible, project-based curriculum with varied entry points for diverse group of learners, and by reconceptualizing personalization as a three-dimensional practice that emphasizes learning that’s meaningful, relevant, and accessible to all learners–one that’s driven by human beings, not computers.

To learn more about you and your schools can reclaim personalized learning, consider buying my new book here. This resource has tools to help educators create a sense of belonging, humanize technology integration, and effect socially just teaching and learning—all central issues in equity.

Paul Emerich France is a National Board Certified Teacher, dedicated to helping all learners feel seen, heard, and valued in the classroom. Paul writes for a number of prominent education publications, such as Educational Leadership, Edutopia, EdSurge, and the International Literacy Association’s Literacy Today. Paul has taught in multiple settings, ranging from transitional kindergarten to fifth grade. He has taught in both public and independent schools, even spending a bit of time in Silicon Valley, working for an education technology company, founding three microschools and building personalized learning software for the classroom. It was this experience that secured Paul’s understanding of human-centered pedagogy that prioritizes humanity over technology. Now, Paul is a sought-after writer and speaker, having presented at SXSW EDU and serving as keynote speaker at regional and national conferences. His teaching and thought leadership has been featured in The Atlantic, WIRED, and The New Yorker. Above all else, he enjoys connecting with his students and fellow teachers, encouraging all to have courageous conversations about identity to make learning personal for adults and children alike. He has published Reclaiming Personalized Learning with Corwin.

What is Balanced Literacy? [VIDEO]

Revisiting Inside the Black Box 20 Years On

White Educators Must Put in the Work: Free Tools for Dismantling Biased Teaching